THE JEWEL ON THE TECHE

Arnaudville rests on the border of St. Landry and St. Martin parishes, near the intersection of interstates 10 and 49, and just north of Lafayette—which is to say— in the belly of Acadiana.  Arnaudville is tiny and one of the oldest towns in Louisiana and nearly four in 10 people here speak Cajun French at home. Names like Broussard, Guidry and Richard abound. The lovely Bayou Teche intersects with Bayou Fuselier in Arnaudville, making the town a perfect locale for anyone also interested a swamp tour or two. Boudin sausage is standard local fare, as is etoufee. Arnaudville fetes this spicy shellfish (or chicken) and rice dish with an annual festival. On the musical front, the Cajun fiddle is associated with Arnaudville. It’s not unusual to hear four-string masters sawing away in spontaneous jam sessions. Arnaudville also supports a thriving arts community, centered in the old part of town.

According to the United States Census Bureau, the town has a total area of 0.7 square miles (1.9 km²).  None of the area is covered with water.   On the original site of an Attakapas Indian village,  Arnaudville is one of the oldest remaining towns in St. Landry Parish. The French settled this area in the 18th Century. First called La Murière, it was later known as La Jonction which meant "The Junction" translated from French. By the 19th century, the town was named after the Brothers Arnaud, who had donated a large amount of land to the town to make a Church for whites and blacks (which still exists today). The Arnauds were the family from which the town got its final name and many of their descendants still live in the area.

Arnaudville was incorporated in 1870. 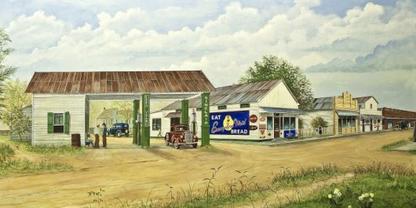